The latest news from the ANZ region and worldwide. Link to Mailchimp Campaign 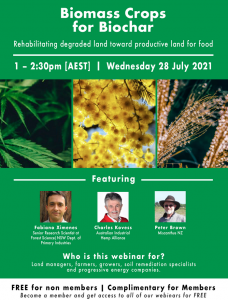 A new report has been prepared for the New Zealand Ministry of Primary Industries and the New Zealand Agricultural Greenhouse Gas Research Centre. This report is a detailed review of the evidence for the potential role of biochar to reduce net GHG emissions from New Zealand agriculture.

Key topics included in the review are:

We are pleased to bring to your attention a formal invitation from Bloomberg Philanthropies for cities to apply for support: recognizing that the fight against climate change is more urgent than ever, Bloomberg Philanthropies is inviting proposals from cities to develop city-wide biochar projects. The key points of the attached invitation are below. If your City plan to submit an application, we would recommend you get in touch with Louise Ellaway at Bloomberg Philanthropies at lellaway@bloomberg.org in advance to notify them of your intent to apply. You can also reach out to Louise should you have any questions.

To apply on behalf of your city, please submit a completed response via e-mail to Louise Ellaway at lellaway@bloomberg.org no later than 12pm GMT on Wednesday 31 March 2021. 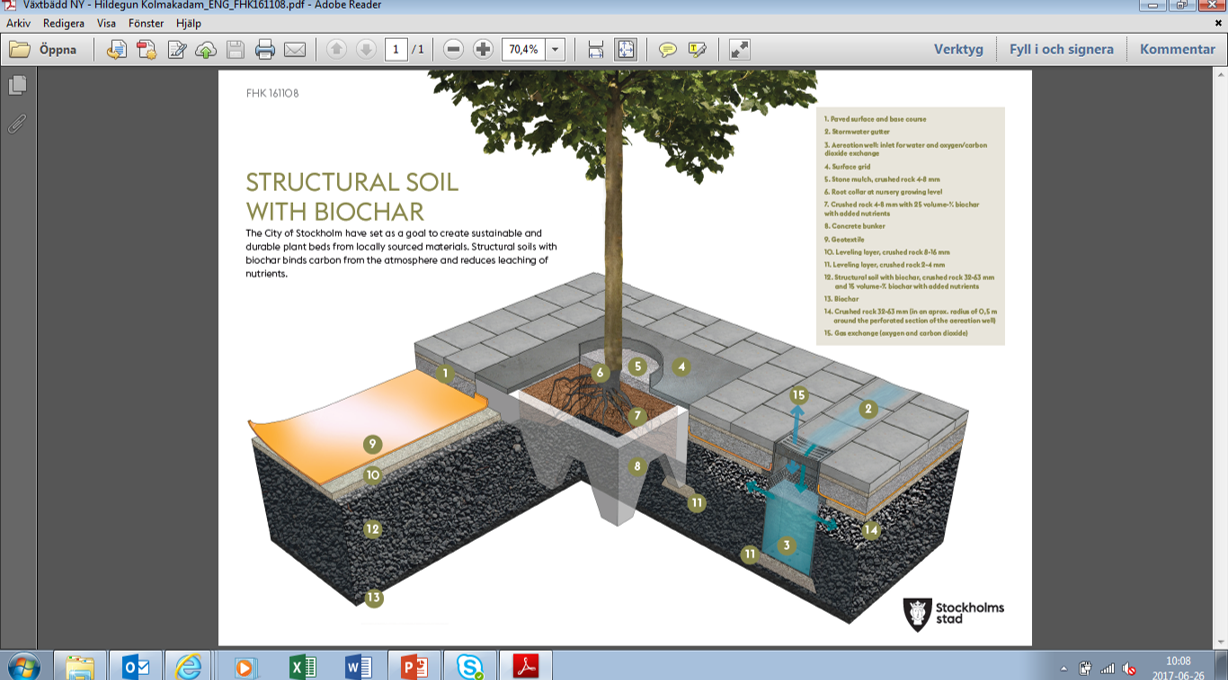 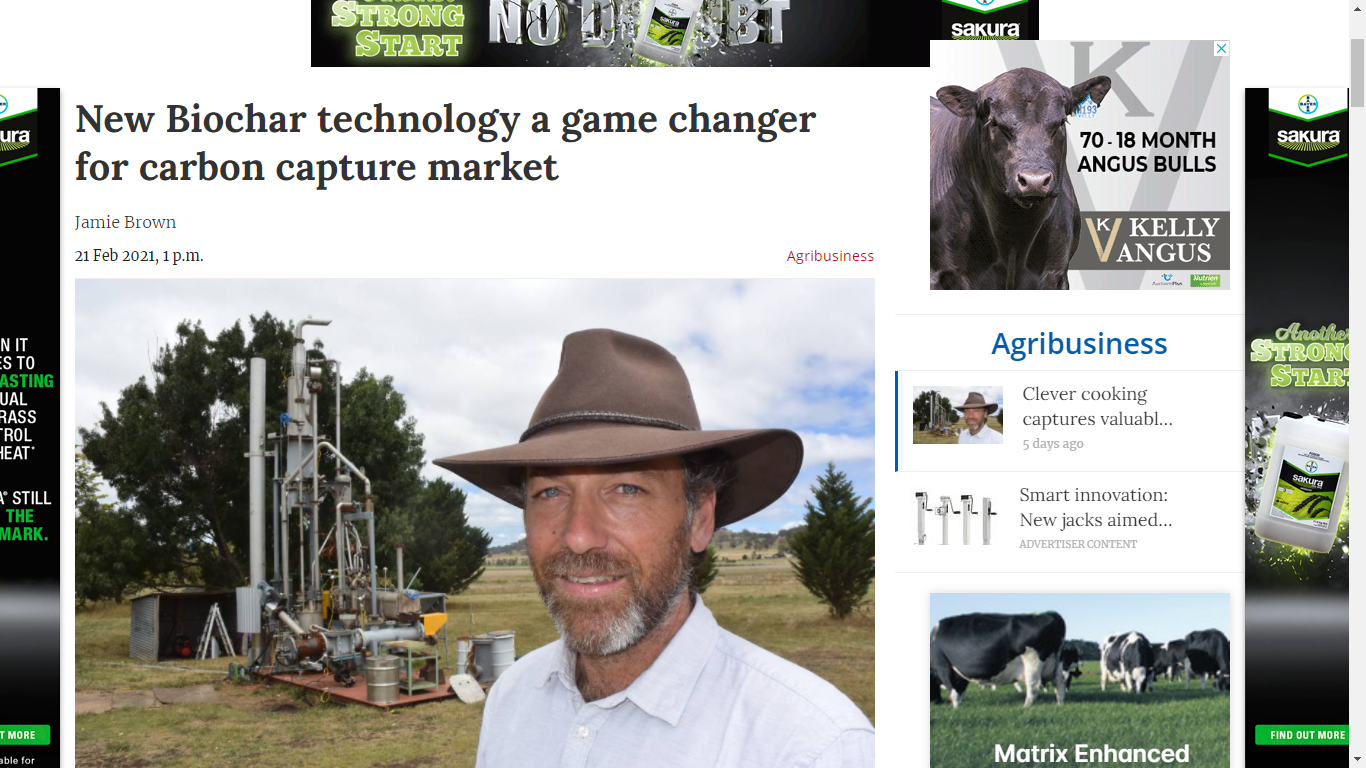 Corporate Tech giant Microsoft have hopped on the steering wheel of the global economy ship by understanding and repairing the effect their business activities have had in the past and are still having on the carbon cycle. We are proud to announce that ANZ Biochar made it into the mix after careful reflection.

The nascent carbon removal industry just had a big pebble dropped into it’s pond that will cause ripple effects right to the edge as they lead the way along with other Fortune 500 Companies such as Stripe, Shopify & Swiss Re to focus on methods and technologies that suck CO2 out of the atmosphere in the short, medium and long term. Biochar was the only medium term solution they chose.

Our colleagues in Europe (Germany & Finland) joined Australia’s ECHO2 pyrolysis technology developed by Rainbow Bee Eater (RBE) and specifically the Holla Fresh Bioenergy & Biochar Project in Tantanoola, South Australia. In any given year from here on in this project is estimated to produce approximately 1000 -1500 tonnes of biochar which equates to 2880 – 4320 tonnes of CO2 equivalent per annum. In this it’s inaugural year, Microsoft purchased 400 mtCO2 from the project.

The Echo2 was originally funded by Alcoa, the Australian Aluminium company as a way of de-carbonising their processes but it didn’t progress to the commercial phase as the company could not produce a clean syngas from it. Former Alcoa Senior Executive Peter Burgess who was also a Director of Rainbow Bee Eater at the time wrote into the contract that they would take over the technology and develop it if Alcoa were not interested. That’s exactly what they did.

Peter travelled to world to see if he could find a pyrolysis technology that could produce a clean syngas suitable to use as a form of bioenergy in commercial enterprises but to his demise was unsuccessful. RBE have spent a now 12 year journey to develop the technology to what it is today.

Protected Cropping is the first industry that has benefited from the Echo2 in ANZ, powering a 1 hectare glasshouse growing herbs for Woolworths, Coles and other produce retail outlets. Holla Fresh Herbs are ideally located halfway between Melbourne and Adelaide, servicing both markets.

The carbon removal certificates produced by the Echo2 @ Holla Fresh Herbs were made possible by the world’s first voluntary carbon removal marketplace, Puro.Earth of which the Echo2 is listed as a supplier. This early adopter underwent a rigorous verification process including a life cycle assessment (LCA) to ensure they have removed the carbon from the atmosphere and stored it in soil in the medium to long term for between 100 years up to a millennia. The LCA was carried out by Energy Link Services.

99% of the short term natural solutions Microsoft chose were sustainable tree planting and verified soil carbon projects which highlight three important points. (i) Tree planting & soil carbon are the current cheapest, at scale carbon removal method (ii) TP & SC are short term because there are so many variables to consider when it comes to their permanency such as decay and combustion. (iii) sustainable land management a.k.a. Pyrogenic Carbon Capture & Storage (PyCCS) combined with bioenergy and biochar production is now a solid & secure business activity to be involved in.

Impact investors therefore take note of the safe bet that biochar provides when it comes to carbon removal and carbon accounting. Microsoft have put their money where their mouth is, watch others follow.

Last week, ANZBIG delivered a Biochar Workshop by our Foundational Member and Education & Training Co-ordinator, Professor Stephen Joseph PhD AM. The following report was submitted. In this instance, a Pizza Cob Oven was used so that it was fire safe and steel drum retorts were placed inside. ANZBIG aims to purchase a mobile kiln in 2021 for a series of regional workshops or provide a pizza oven. Please send your expressions of interest to hold a workshop to execdirect@anzbig.org

Thanks to Stephen for the presentation of the workshop, his skills to deliver, passion and knowledge of biochar was amazing.  We completed an evaluation form at the end of the workshop and every participant gave him the highest assessment. Stephen was able to deliver the information on a farmer level which is important. There was lots of information to take in but combining the theory with the practical aspect kept the participants enthusiastic. Making the biochar was fun, we were put into groups and had to discuss the recipes and make biochar.  Different ratios of ingredients were used depending on what use the biochar was intended for. The ingredients varied we had straw, wood chip, chicken manure, crusher dust and red clay. Biochar has many uses could have been, for animal nutrition, growing vegetables, fruit trees/orchards or pastures. We made pizzas in the oven after the biochar and then we got to eat them which everyone enjoyed. Incorporating biochar into your garden/farming system has many health/environmental benefits. It can increase the water holding capacity of soil, stores carbon, increases your yield in production and profit. Biochar is able to lock up heavy metals in the soil so they aren’t plant available, added to water soluble nutrients buffers them, can be mixed with molasses and fed to livestock this enhances their nutrition and when they produce manure dung beetles bury the biochar into the soil. Various designs of retorts were discussed which gave participants food for thought depending on what scale of biochar production they intend to do. I can’t forget to mention Stephen had lots of stories to tell from his experiences throughout the world. Early on in his journey included working with Australian aboriginal people in Arnhem land who taught him a lot about making biochar. We had an educational two days and we would like to have Stephen back again, to encourage others to attend to learn about the various uses/benefits of biochar. 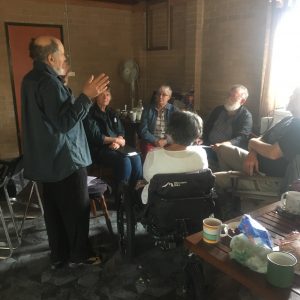 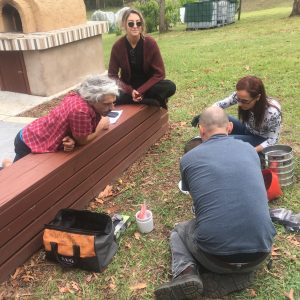 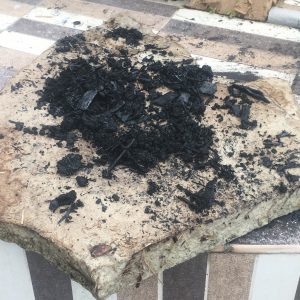 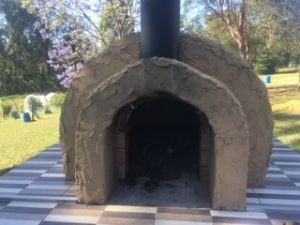 Biochar In The Vineyard: Building A Foundation For Sustainability 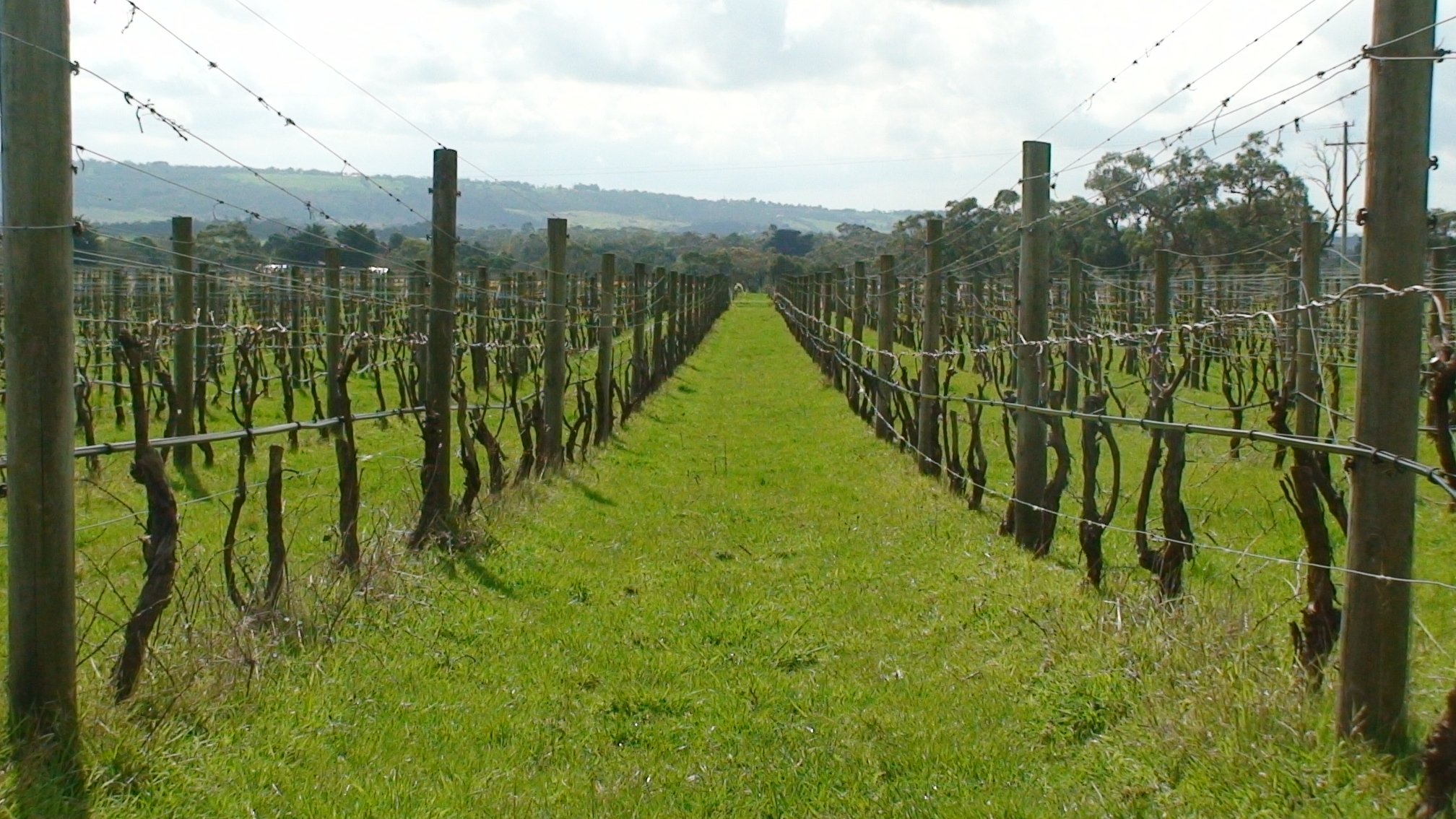 A new article written by Simone Madden-Grey explores the potential benefits for winegrape producers, showcased in the October 2020 edition of Grapegrower & Winemaker.

A piece from the article:

“The growing body of systematic research complements existing anecdotal evidence to create a compelling case for using biochar in the vineyard. Reduced carbon emissions, carbon sequestration, reduction in costs associated with water and fertiliser management, as well as a process that can engage consumers by way of increased environmental credentials all create a strong foundation upon which sustainable practice and policy could be built.” 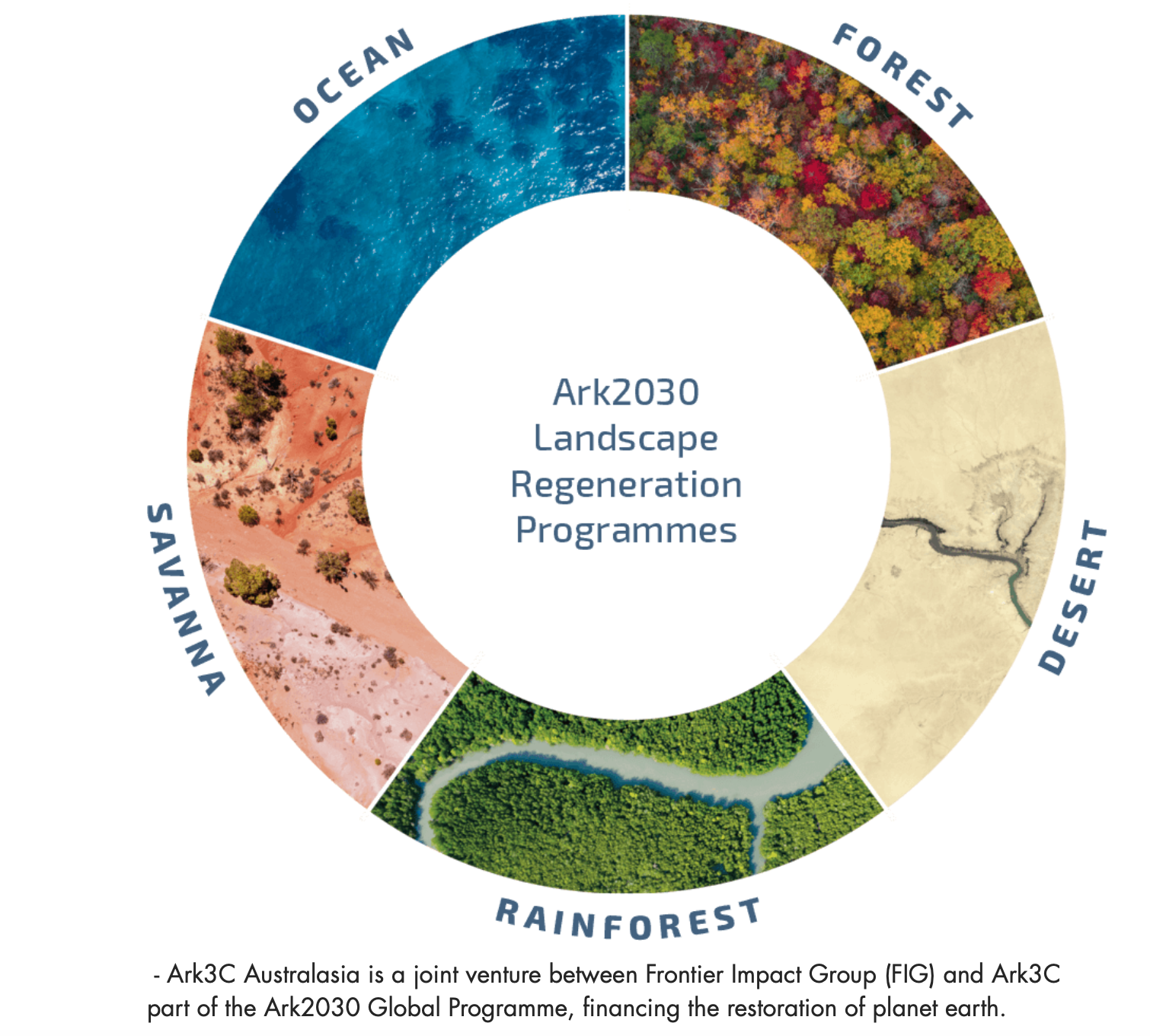 Kochii on target for 100 tonnes 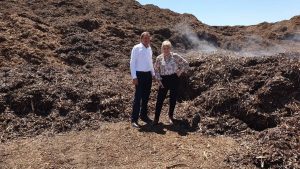 Agriculture Region MLC Darren West and Regional Development, Agriculture and Food Minister Alannah MacTiernan during a visit to Kochii Eucalyptus Oil’s eucy still at Kalannie earlier this year. They are standing in the spent eucalyptus biomass left after oil had been extracted. Kochii is investigating turning it into biochar.

Due to the age of current district heating system it is now requiring a major overhaul providing Council the opportunity to implement an innovative and modern technology with a holistic approach. The proposal is to replace the two gas boilers with a well-researched biomass system, ECHO2 from Rainbow Bee Eater. This will potentially use local timber industry & Council wood waste as the fuel source and bring about significant advantages economically, technically and environmentally. ECHO2 is designed and manufactured in Australia by Rainbow Bee Eater and SDA Engineering.

Download the full EOI : PORTLAND BIO-ENERGY PLANT – EOI FOR THE SUPPLY OF BIOMASS AND THE OFF-TAKE OF BIOCHAR AND WOOD VINEGAR FOR THE PERIOD 2022-27 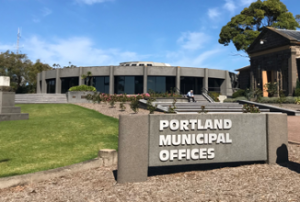 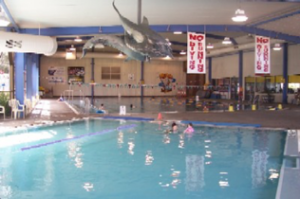